#1. Goats eat everything, literally everything, but the grass.
Goats are browsers not grazers. Even though goats are thought of as farm animals like cattle they are more closely related to deer and thus have the same eating habits. Goats will strip a tree bare of leaves before they even touch the grass, no matter how lush and green the pasture may be. My own trees and garden have sustained damage from not adequately safeguarding them from my flock. Their prehensile lips can easily and efficiently pluck leaves off vines, trees, and bushes all while avoiding thorns or other protective adaptations. This “stripped earth” technique is why goats have been used for scrubland management for so long. Their effectiveness is so well known even Amazon.com has had the option to rent goats for clearing brush! Protect trees from voracious goats who will strip leaves, bark, and tender branches.

#2. Goats are dangerously curious creatures.
Goats, like children, will get into everything. They love to play and investigate new things with not only their mouths but clamoring all over it (why I have hoof prints on my car hood- FYI not covered by insurance!). They will even nibble a clothesline if in reach and rub and paw at until sometimes damage can be done. I have seen my flock crowd around a new tractor attachment for hours, just checking it out and proceeding to leave their stamp of approval in the form of pellets. Have had to untangle more than one goat from fences after some overzealous feeding.

#3. They are oddly incredibly intelligent creatures.
Goats are considered highly intelligent in the animal community, on par with dogs and pigs despite their dopey looks and propensity for entanglement. Not only are they able to recall good feed plots and return to them again and again but they can remember which plants taste best, which areas to avoid, and how to get around obstacles to get to their munchies. They can recognize differences between humans and will even hold their owners to a schedule. I can’t tell you how many times I have heard their sounds of annoyance outside my window if I am late on feeding time. They also have a knack for knowing when that feed bucket is actually full and when it’s an ill fated trick to get them to move pastures. Makes one wonder who really runs the operation. First our hearts, next they’ll take our jobs. 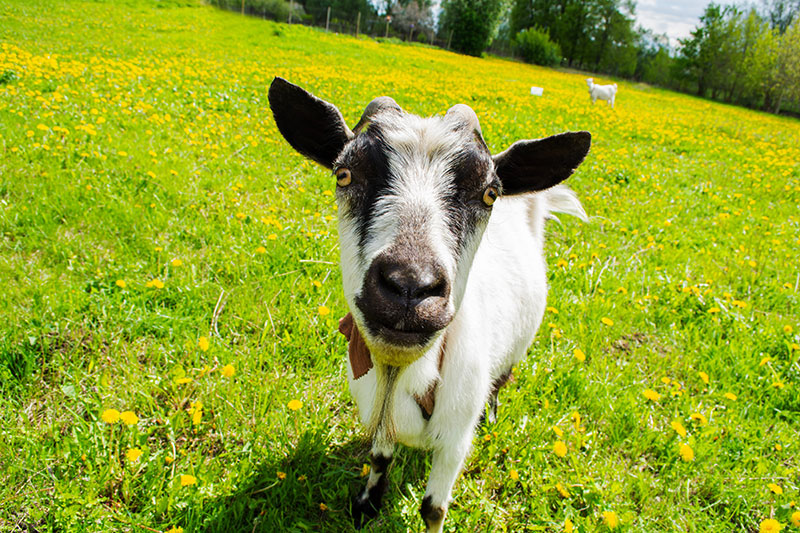 #4. Babies and adults will imprint on people and think they are human.
As anybody that has bottle raised any animal they will know the baby now thinks of itself as a person. This typically does not fade with age. I have a bottle baby that I bought at 3 months out after she was weaned and she still prefers the company of people to other goats. More often than not she will be on my back porch cuddled up with the dog. I learned that I can’t leave my doors open to catch the breeze either lest little Navi be found curled up on the couch. I even found her on my bed once just snoozing away! Studies have also shown that goats are able to differentiate between human facial expressions and prefer happier people. So smile! The goats are watching.

#5. They can do tricks!
Goats, much like dogs and other animals can be housebroken and leash trained. Goats take longer as they are not as responsive and needy as pooches but just look on YouTube and you’ll see a barrage of entertaining features. I’ve not had great success with my Navi on housebreaking but she has gotten much better than when she first started finding her way inside. Though I personally have not even attempted to train my goats other than basic things such as, “come”, “stay”, and “please for the love of all that is holy be quiet” with mixed results. They are very responsive to treats and verbal commands. Now that doesn’t mean with training they will do what you say or stay in place.

#6. Flocks can be difficult to contain.
As with out here, and I’m sure anywhere goats are kept, the adage that, “if it can’t hold water it won’t hold a goat” is heard often. This is VERY true much to my chagrin. The day after I got my first pair of goats they had not only made it out of my fenced yard but out of the perimeter fence another 2 acres away (both made of 4×4 inch mesh about 4.5 feet high) but then half a mile through two more barbed wire fences! With goats, fences are more to keep other creatures out than your flock in. Goats, especially the kids, are the Houdinis of the farm yard. I have seen them power through electric fences, jump 5 feet in a single bound, flatten out to crawl under chain link, squeeze through gate gaps, and even legitimately climb trees to get to the other pasture.

#7. Goats can and will go feral very quickly.
So far we have established that goats are intelligent, self-reliant, and hardy little suckers. Much like Texas in regards to the rest of the United States, they don’t need you and will do what they want. With goats, they need frequent exposure to their caretaker and to be worked lest they become feral. Cats and goats are the two animals that revert to wild behavior the fastest when positive human interaction is taken away. Just look at Australia’s wild goat population of 2.3 million after the species was introduced in 1788. This figure doesn’t include the privately held flocks either and is likely on the lower end of the actual population.(Business AU) Australians have turned what was once a nuisance into a thriving export to neighboring Africa and Asia. Goat meat is quite popular on the world food scene. 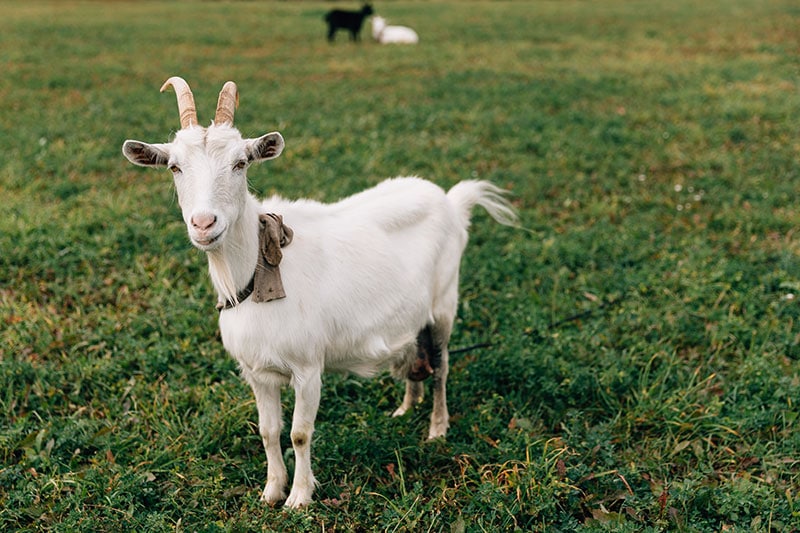 #8. Chevon is a traditionally beloved meat finding popularity among new generations.
In the culinary world adult goat meat is called, “chevon” and many times any juvenile product called, “cabrito”. Goat meat has doubled in production every decade for the last 30 years reaching 1 million animals being processed annually in the United States alone (Scarbrough). Texas alone had a total of over 800,000 head in 2017 of dairy and meat producing goats (USDA). This is due in part from immigrants from Africa, Middle East, and Asia where goat meat is not only a traditional food but in some cases holy ceremonial food like in the Islamic and Jewish faiths. Average price per pound for goat meat is about $10/lb. so for now a luxury item if bought in a restaurant. When processed at home it can be the perfect thing to feed a family for several weeks since a 100 lb live animal can easily garner 60 lbs of usable meat. Demand is increasing though as mainstream culture sees the highly prized nutritional and flavor value in chevon (USDA). Goat farming is definitely a profitable business to take part in. Not even including dairy goats as their rich and nutritiative milk is being used more in cosmetics and cooking than ever before. However, as the rise of goat products increases the ability to find products for goats can still be a trial.

#9. It can be difficult to get the right supplies.
Despite being one of the most common meats eaten in the world, especially as the attitudes toward factory farming change, goat specific products are still a specialty. Often associated with sheep I have heard horror stories of entire flocks being injured or even killed by using sheep intended products on goats. Most of my medical supplies such as antibiotics (much are intended for cattle) have been ordered online for sake of simplicity and I still pay a pretty penny if able to find them at all. Befriending a local vet can help access quality supplies as some online vet supply websites require prescriptions. To effectively raise the highest quality goat there is much self teaching and learning off label uses for medications, tools, as well as just plain thinking outside of the box. Goats are not raised commercially for meat or milk on a large scale in America so mass produced and evidence based information is not largely available. Luckily, thanks to the growing online presence of goat owners the ability to learn from others just got a little easier.

#10. Definite labor in “Labor of Love”.
How much work goats need compared to their larger cow pasture mates is amazing. My father actually retired from goats and started cattle because the labor load was too much for him – even with fairly regular help from me and my brother (granted at our peak we had about 90 head which is a lot no matter how you work it). Between deworming, hoof trims, vaccinations, more deworming, pasture rotation, pregnancy checks, even more deworming, birthing season, and not to include the emergencies goats can be quite the handful even with the proper equipment. The upside is that unlike cows one can do a lot of the necessary care with just an extra pair of hands to hold the bugger. That’s the trade off between goats and cows. Cows are a higher investment per head but lower labor where goats are lower overhead but much more hands on. Despite all the bruises, tears, sweat, and sunburns there is nothing more rewarding I would rather do.

Goats don’t make up your whole life but they certainly make your life whole.

About Elizabeth
Former California city kid Liz is now an aspiring rancher managing 10 acres in East Texas by herself. Surrounded by goats, cows, and geese(oh my!) She is building her best life being a full time licensed nurse, proud animal mama, and completing her AgScience/Ranch management degrees at Trinity Valley College. Follow her and all the antics at Fox Run Farmstead on Instagram. Username: LadyNerdLiz or just #Lonestead #FoxRunFarmstead. Liz has a debut podcast on Spreaker.com titled “the Lonestead Podcast”