It all started with a children’s picture book titled, “The Honeybee” by Kristin Hall. We checked it out for our daughter at our local library. One book led to another and before I knew it we had a full fledged interest in bees, why they are so important and what we can do to help them. We even bought a little pollinator house at Tractor Supply for our garden. Around the same time I started following some Bee enthusiasts on Instagram and one of those accounts happened to be Elzner Farms in New Summerfield, Texas. Their brightly painted hives caught my eye and being an hour away I thought I would reach out and see if we could connect. Lucky for us, the owners, Meagan and Isaac invited us out to the farm to get a first hand beekeeper experience.

With 460 acres, Isaac’s family leases land out for cattle and hay in addition to keeping bees. The couple and their 2 young children have lived on the farm for over 2 years. While Isaac’s degree in botany is a natural progression into beekeeping, Meagan’s background is definitely more surprising. As a fashion design and merchandising graduate it seemed like a big jump to get into beekeeping but then again, her colorful hives are the prettiest I have seen. Wanting to escape the big city life in Houston they started by purchasing 2 Flow hives designed for hobby beekeepers that they put on the farm. One didn’t make it but the other thrived and now they have about 250 hives in 18 different locations across East Texas. The hives are about 1.5-2 miles apart. 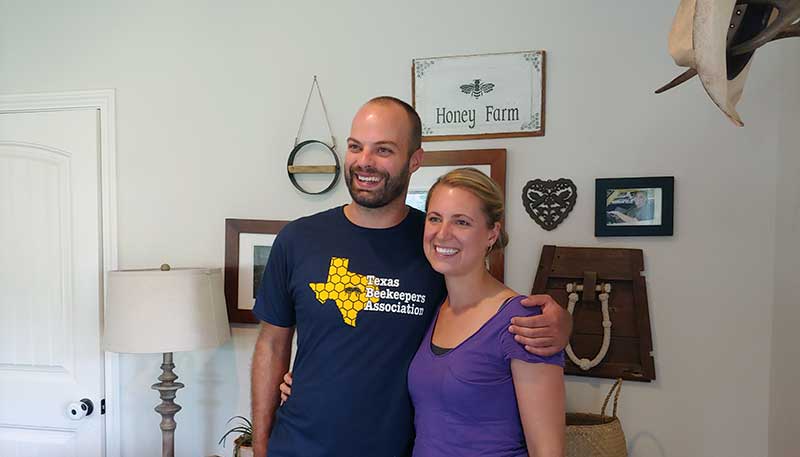 Meagan drove us out to one of the hives and despite the 90 degree weather we suited up and watched while she got her smoker prepared to calm the bees so we could get an up close view of the inner hive workings. As we approached she warned us to stay near the side or behind the hive, not at their front door. The smoke masks pheromones that would otherwise alarm the bees that intruders are about to break into their home. It was obvious Meagan has done this hundreds, if not thousands of times and as she pried apart the hive chambers she took her time explaining what the bees were doing. For instance, I had no idea that queen bees are determined by what they are fed. While all bee larvae are fed some royal jelly produced by nurse bees for the first few days after hatching, only the queen larvae are fed the jelly exclusively. The rest of the bees, destined to become worker bees are switched to bee bread. Queens are raised in specially constructed queen cells. The very first queen to hatch will then go around and sting her sisters, killing them so she doesn’t have any competition. How fascinating is that?! It’s like nature’s version of Game of Thrones. The queen will also travel up to 5 miles away from her hive to mate. 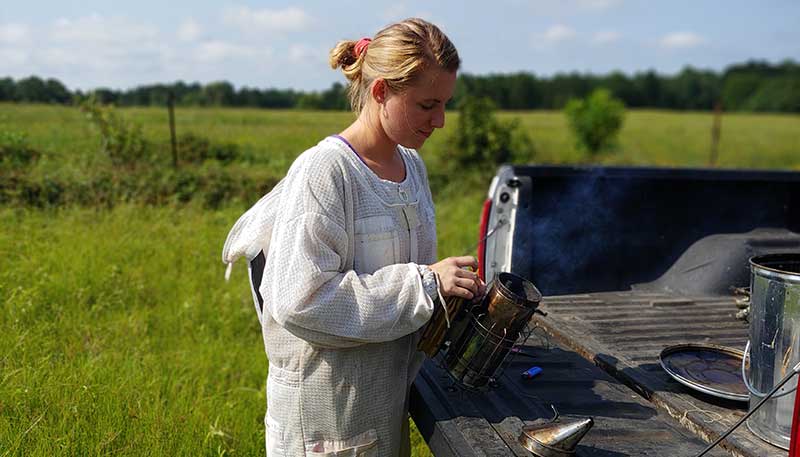 Of course I asked Meagan about getting stung but only after we were back in the truck and far away from the hives. Getting stung is part of the job and Meagan shrugged it off saying it happens a few times a week. You can reduce the reaction by scraping the stinger out with your fingernail. Bees often get a bad rap because people think they are mean. There are over 4,000 species of native bees in North America. Sometimes it’s hard to tell a bee from a wasp. Bees don’t want to sting and Africanized bees are more defensive than European honey bees.

The next obvious question for me was can you actually make a living as a beekeeper? That answer is yes and no. In order to be successful you may have to explore all your revenue options and try multiple things. Migratory beekeepers take their bees on the road and set up hives to facilitate pollination of certain food crops like almonds in California for example. This means you are spending the majority of your time travelling which may fit some people’s lifestyle but not others. Side liner is a term for mid level beekeepers that may have full time jobs but are able to procure enough honey from their hives to have a steady income stream. It’s likely they utilize the bees wax or pollen to make products as well. Established beekeepers can also help new folks starting out by selling hives, equipment or bees. There are also bee removal services that make a living removing and relocating bees. 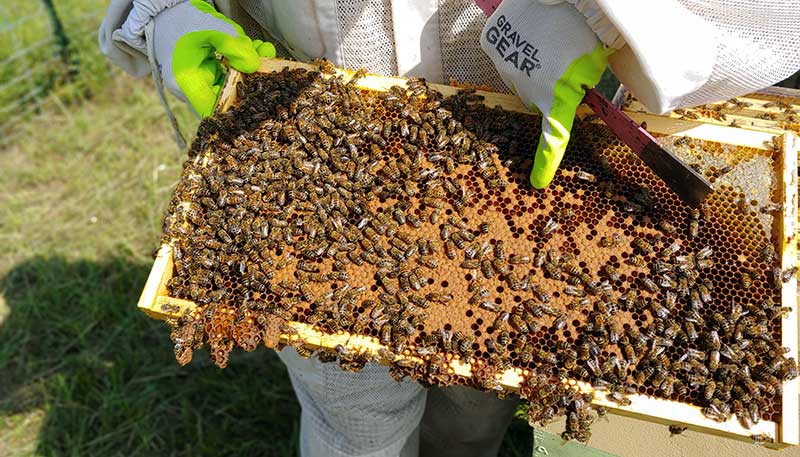 Like many industries there are certain times of year that are busier than others. Springtime finds Meagan and Isaac living in their bee suits from sunup to sundown. Honey flow starts in May and Summer primarily consists of hive checks. Fall is more hands off and Winter is spent building and repairing equipment and working on distributing honey to local stores. One of the biggest challenges to beekeepers is creating sustainable apiaries so you don’t have to source bees from others. Some of the largest threats to bees may surprise you. Skunks for instance, go after bees themselves. At night they will scratch at the hive drawing out the bees to make a meal out of them. As a way to protect their bees, keepers raise the hives off the ground which forces the skunk to expose its underbelly to stings in order to reach the hive. When you share your farm or ranch with cows the occasional curious calf can accidentally harm your hive so it’s a good idea to fence them off. The worst threat is the Varroa mite. These nasty parasites require a honey bee host to survive and reproduce. They can be devastating to entire colonies of bees and the beekeeper has to remain vigilant to protect their bees.

Beekeepers, honey farmers or apiarists as they are called are becoming more popular and the startup cost is not as daunting as you might think. While it can be done cheaper, realistically you can expect to spend about $1,000 to get going. This would include your hive, basic equipment and your nucleus colony (bees). Before you take the plunge the Elzner’s recommend visiting your local bee club, find a mentor and take some classes. While there is an abundance of information online exercise caution because beekeeping is relative to your climate and native plants. You will have to spend a lot of time in your hives in the beginning. Set yourself up for success by allotting for adequate time to do so. 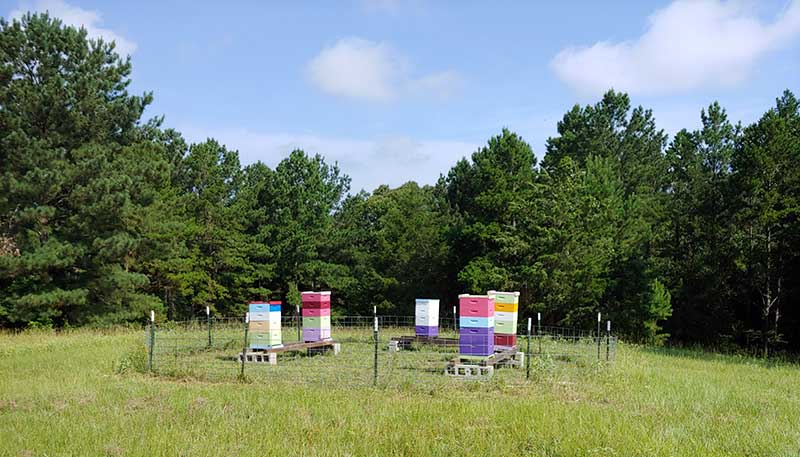 You don’t have to become a beekeeper to become “bee-sensitized” rather than desensitized to the struggles facing our bees. About 35% of the world’s food crops depend on pollinators. Some crops like blueberries and cherries are 90% dependent on honey bee pollination while almonds depend entirely on the honey bee for pollination at bloom time. A single bee colony can pollinate at least 250 million flowers EACH DAY! You thought your to-do list was long. 70 out of the top 100 human food crops which supply about 90% of the world’s nutrition are pollinated by bees. Worldwide bee populations are in a steady decline. We can’t live a healthy life without bees. So what can we do short of becoming a beekeeper?

Plant flowering trees because trees produce more nectar than flowers. Be diligent about where you purchase plants as some are bred not to produce nectar. Limit pesticide use. Don’t spray flowers directly, and spray in the evening when bees aren’t out foraging. Warn your beekeeping neighbors if you do plan to use pesticides, wind will blow them further than you think and can kill an entire hive. Having a good partnership with your neighboring farmers is a win-win. Purchase local honey and related products when you can. The Elzner’s are a wealth of information and they have seen a positive impact on their own property after keeping bees for the last 5 years with native plant species increasing. You can find out where to purchase their honey on their website: https://www.elznerfarms.com/ 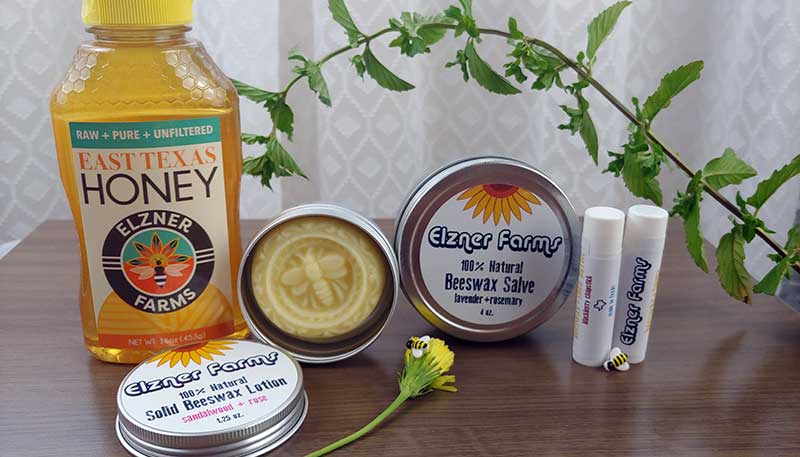 Here are some links to children’s books on Amazon.com about bees that we fell in love with:
The Honey Bee
The Bee Book
Bee
The Honeybee Man

The Elzner’s Recommend:
The American Bee Journal
Beekeeping for Dummies
The Beekeeper’s Bible