The hunt for good Mexican food is ongoing for our family. If given a choice, I could eat it for breakfast, lunch and dinner, nearly 7 days a week. While we were in Lufkin recently we found Skyline Burrito. Set up in a similar fashion to Chipotle, where you can visually point out the ingredients you want to customize your burrito, burrito bowl, tacos, nachos, quesadilla, etc. The customer interacts with the staff during the whole process. Being our first time, I had questions and of course some special requests for our daughter’s order (because according to her not all cheese is created equal). The 2 things that stood out right away were the cleanliness of the serving area and the customer service itself. 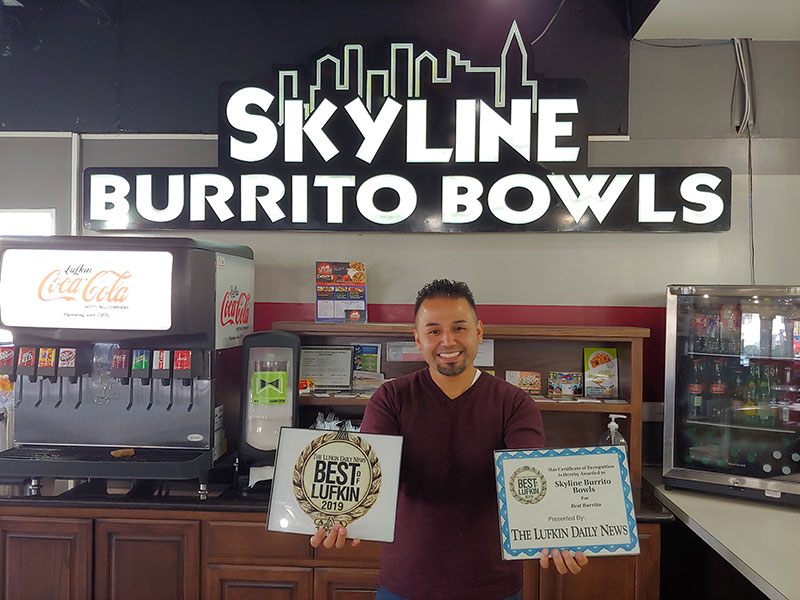 While we don’t eat out an excessive amount, we do our fair share, especially when we are on the road. I waited tables while I was in college so I can absolutely appreciate the hard work that goes into it. I also have some pretty high standards having put up with a lot as a server. Needless to say we were greeted warmly and our questions were promptly answered. I got the chicken burrito bowl, the husband chose a mixed meat burrito and the kiddo picked the kid’s meal with a quesadilla. The food was fresh and flavorful. Compared to other Mexican restaurants we have been to the standouts here include authentic dishes like, al pastor which is a spit-grilled pork. According to owner, Tavo Velazquez – a lot of love goes into preparing that dish. The cilantro lime chicken was my personal favorite. It is tender, juicy and infused with flavor that stands alone when you are eating a burrito bowl full of other ingredients. The husband was a big fan of the brisket. Understandably so, the meat is marinated and slow cooked for an elevated depth of flavor. 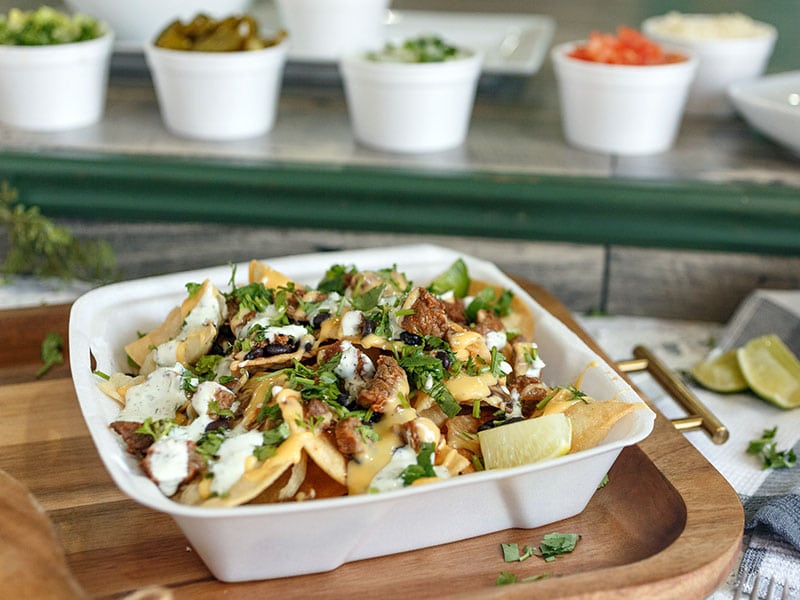 I am admittedly a queso snob. A lot of places try to pass off that giant can of nacho cheese you get at football games and movie theatres as queso. Personally, the only times that’s acceptable are during football games and at the movies. Otherwise, I want my queso to actually taste like cheese, have a creamy texture and compliment my meal rather than dominate with an orange plastic like coating. Skyline not only has good queso, the guacamole or green gold as I call it was homemade and perfectly spiced. Each avocado is handpicked by Tavo himself. The food is worth the trip and the multitude of awards on the walls attest to that fact. Not to mention the regular customers that come in, who are greeted by name. In addition to a tasty Mexican restaurant, Tavo’s sister runs the boutique bakery inside. Choose from cupcakes, brownies and a variety of sweet treats to eat there or if you are too full, order to go. 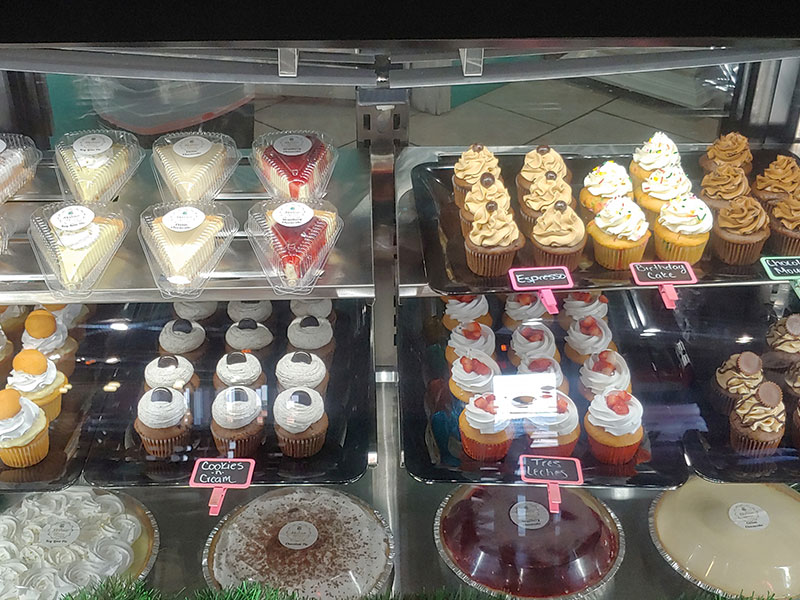 I sat down with Tavo and wanted to know how a guy from Illinois ended up in East Texas with a thriving restaurant. The big move was spearheaded by his parents and a job change. There was obviously a cultural shift coming from a big city to a small town that made the transition challenging and somewhat lonely. Tavo moved back to Chicago where life threw him a few curve balls. Tavo admitted he had hit his rock bottom and turned over his future to God, gaining powerful insight and guidance from his pastor along the way. He had restaurant experience under his belt, managing a busy Buffalo Wild Wings in Chicago where he had worked up the ranks from a dishwasher. Tavo’s entrepreneurial spirit led him to other work experience like design and architecture, even real estate and flipping houses. In 2009 Tavo came back to East Texas for his Mom. He secured a job at AT&T and while he liked working with people he felt there was something more out there for him. 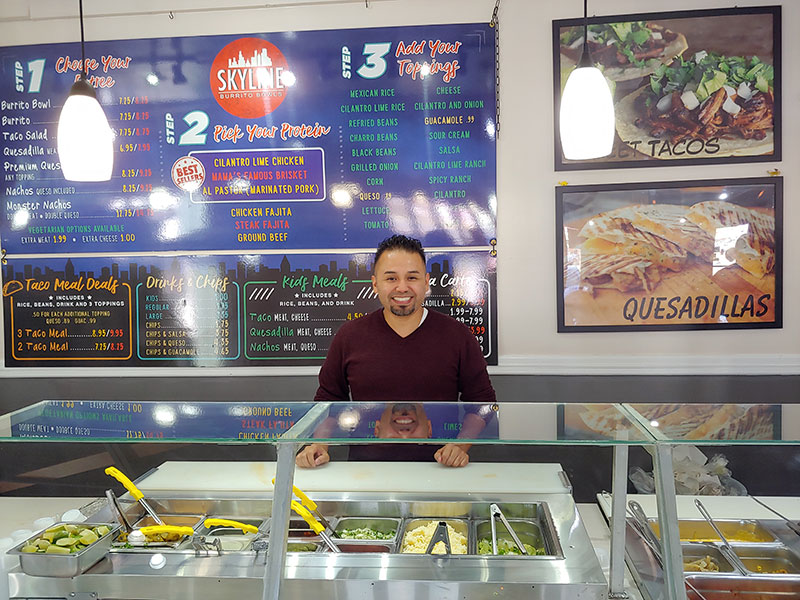 Turns out an opportunity at the Lufkin Mall opened up a possibility for a Mexican restaurant. Through prayer, hard work and determination Tavo turned around a situation that most of us would walk away from. He credits his faith and commitment to tithe 10% of his paycheck no matter the circumstances to his current success. Initially tithing would undoubtedly put some financial strain on Tavo, but he insists it helped him learn to manage his money better. He went on to say, “There is power in the tithe. Malachi 3:10 is the foundation of the company. The secret value the tithe brings is; instant obedience, discipline and stewardship (money management). Once the first 3 are activated and set into motion you activate the 4th and most important set of all. TRUST! But trust has nothing to do with you trusting God, BUT everything to do with God trusting YOU! That’s the secret to life for me. Everyday is an audition and once I’ve earned His trust it gives me the right to ask according to His will and it’s fun when they manifest before your very eyes.” When I asked about the inspiration behind the name, Tavo said it’s a nod to his Chicago roots. The name came to him on a visit back there to decompress when he opened the curtains in his hotel room to reveal the iconic skyline.

When the lease expired at the Mall he was eating at the China Buffet (Skyline’s current location) and the owner approached him, wanting to sell. After several days of negotiation a deal was made and Tavo hasn’t looked back. Running a restaurant is probably one of the most challenging businesses to own. Some of the main issues are knowing your numbers. You are selling percentages and variables change every day for produce so learning to budget is key. It’s never as easy as you think and it’s never as much money as you think. Tavo said the customer has to trust you, your product and your process. I completely agree, I know when I walk into Skyline that I’m going to receive quality food that is prepared well and served by people who are happy to work there. Tavo describes himself as more of a leader than a boss. He does this by being an steadfast example to his 20 member crew, never asking someone else to do a task he wouldn’t complete himself. The team mentality is on display at Skyline and it’s easy to see how the staff works well together. While Tavo is quick to point out he has the best employees, he also says this isn’t their final destination. He wants to help them grow and reach their full potential so they have the tools to excel at whatever job they choose to eventually pursue. 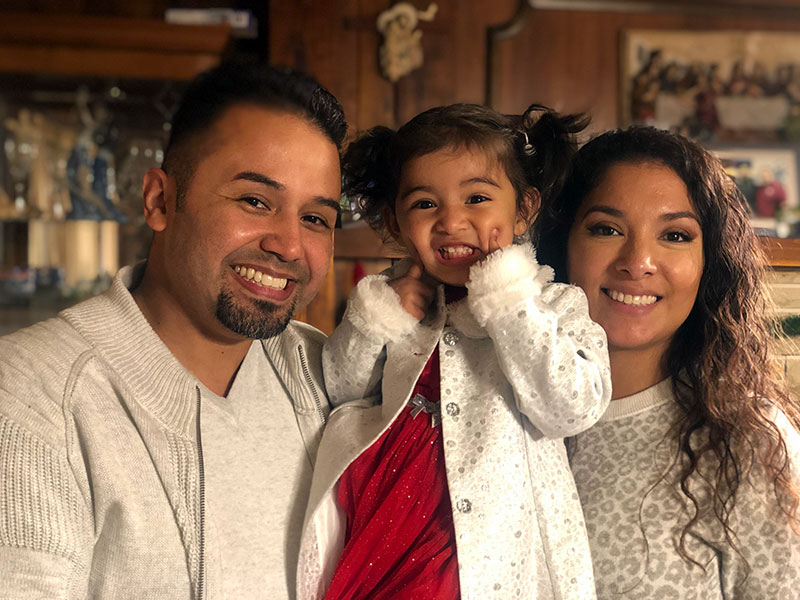 This selfless attitude is a reflection of his involvement with his church, Church La Viña where he sits on the board. He is also active in community outreach. Skyline participates in 3-4 fundraisers a year and also gives monthly. Neighborhood Strong is a local program that pursues grants to help underprivileged families in need of home repairs. Tavo sits on the board and helps people budget and learn from their financial mistakes. Together with his wife, Eva and little girl, Layla Grace this tight knit family have made a positive impact in Lufkin. Stay tuned for an additional location. When the time is right, Tavo would love to expand and bring fresh Mexican food to more locations in East Texas. Do your taste buds a favor and visit Skyline Burrito, knowing your queso habit will help build a stronger community is a win-win.